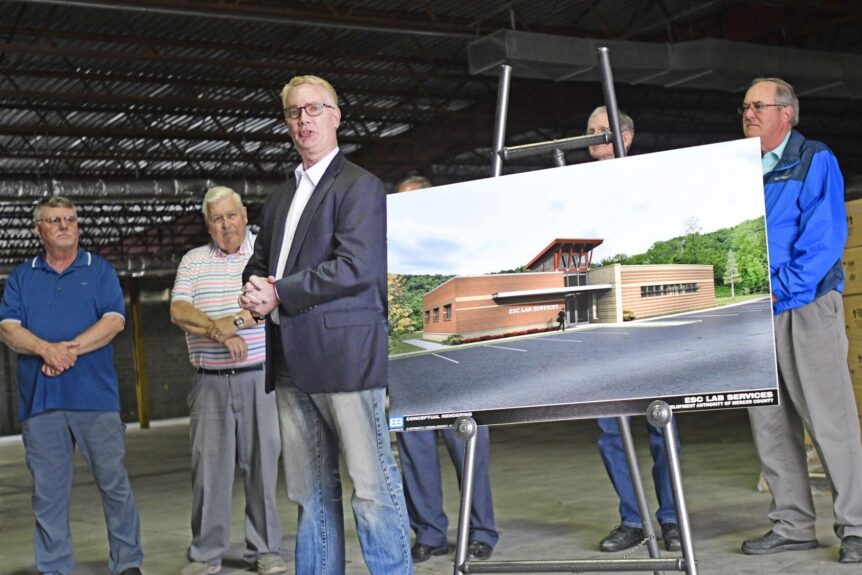 Bruce Smyth, center, owner of ESC Brands, speaks at a press conference, Thursday. ESC Brands is starting Phase I of a three-phase plan that will eventually include a new 200,000 sq. ft. manufacturing facility at the Blue Prince Plaza.

BLUEFIELD — A company locating in the Blue Prince Plaza will eventually bring 300 or more jobs to Mercer County.

ESC Brands, a Lexington, N.C., based industry that specializes in the development of antiviral and antimicrobial products, is starting Phase 1 of a three-phase plan that will eventually include a new 200,000-sq.-ft. manufacturing facility at the site.

John O’Neal, executive director of the Mercer County Economic Development Authority (EDA), made the announcement this afternoon, saying he and others have been working for more than a year to bring the company with “significant jobs and investments.”

“This is another good news piece for our county,” he said. The EDA purchased the vacant Blue Prince Plaza recently.

Smyth said the facility here will initially be a storage and distribution center (in the former Hill’s Department Store location) for the company products, which include cleaners, sanitizers, disinfectants, pet care products, insect repellents and specialized coatings.

“We are very excited about locating here in Mercer County,” he said, praising the support given by the community as well as the state. “In essence, our company makes unique sanitizing products.”

A shipment of products had already arrived here and will soon be distributed to the eastern part of the country. Other warehousing facilities are in Lexington, N.C., and Chino, Calif.

Another part of Phase I is a satellite manufacturing facility inside the building that will bring in items like laundry products and disinfectant concentrates, mix them with water, package the products and then ship them out.

Two large stainless steel tanks have already been delivered for that work.

Phase II will be a separate lab facility in the plaza that will work with both Marshall University and West Virginia University in analyzing new viruses and bacteria.

Smyth said the concept drawing will be finished and set into motion by the end of this year, with the lab eventually hiring about 15 people.

This facility will concentrate on new viruses and existing bacteria studies, he said, calling the lab a “good breeding ground for technology.”

The lab will be self-contained and have the capability of handling viruses like COVID-19.

Smyth said this is a particularly crucial element when new viruses and bacteria surface, and that is likely to happen with increasing frequency.

“Bacteria and viruses are on everyone’s mind right now,” he said. “Whether we realize it or not, the world is actually creating a problem for itself. The more disinfectants we spray around, it’s actually creating the next generation of super bugs.”

This is why the company’s products are so important.

“Our technology kills magnetically or electrostatically,” he said, basically creating an electric shock. It is also safe and persistent.

A bacteria cell has a “daughter” cell every 20 minutes, he said, and if a traditional disinfectant is sprayed the cell will die but the daughter cell will create some resistance to it.

“We are creating a monster as we are moving forward,” he said, but bacteria cannot build a resistance to an electric shock.

In Phase III, the “fully blown” manufacturing facility will be constructed, creating silicon and other products that will be distributed worldwide. This is the phase that will see the bulk of the employees hired.

Smyth said work on Phase III could start sometime next year, but no definite timeline is yet in place.

The company has been in existence for more than 10 years and continues to expand its products, and Smyth said the company started research and development in North Carolina in 2010.

Other products being marketed now help extend the life of fresh packaged food by one day, which is a big deal in a worldwide market, he said.

Another product treats wounds by accelerating the healing process.

“We cure incurable wounds,” he said, adding that this product is sent to help with natural disasters all over the world and some was recently donated to a hospital in Huntington. “It works magic on burn wounds.”

“We are excited about coming here,” he said. “We had some really big offers from Texas but this is close to where we are (in North Carolina). The rollout and support here has been second to none. The outlook is looking bright.”

O’Neal said everyone is pleased the company is locating here, bringing “innovative technology and jobs of the future.”

“These are career-oriented jobs,” he said.

O’Neal said the company is not at all COVID dependent because it has been in operation for 10 years.

“They were already doing this research and already had these projects dealing with other viruses,” he said. “COVID hit and then it was huge.”

Frank Brady, chair of the EDA, said Smyth will be the “anchor tenant” in the facility and all properties but one have a commitment already.

“We are really looking forward to take part in Phase I of ESC Brands coming to Mercer County,” he said. “We are delighted to welcome him and his company. We are really moving in the right direction in Mercer County.”

Gene Buckner, president of the Mercer County Commission, said the commission is pleased to see the progress.

“We’ve waited a long time to see things happen in our economic development,” he said. “John is doing a great job and this is proof of that. Bruce coming to our county is a shot in the arm not just for the people who live here but the people who come with him to bring jobs to our county.”

“We are looking forward to the future here in Mercer County,” he said.

Sen. Chandler Swope, R-6th District, who has been involved in getting the company to locate a facility here, was also on hand for the announcement and said it was the “most exciting” economic development news in some time.