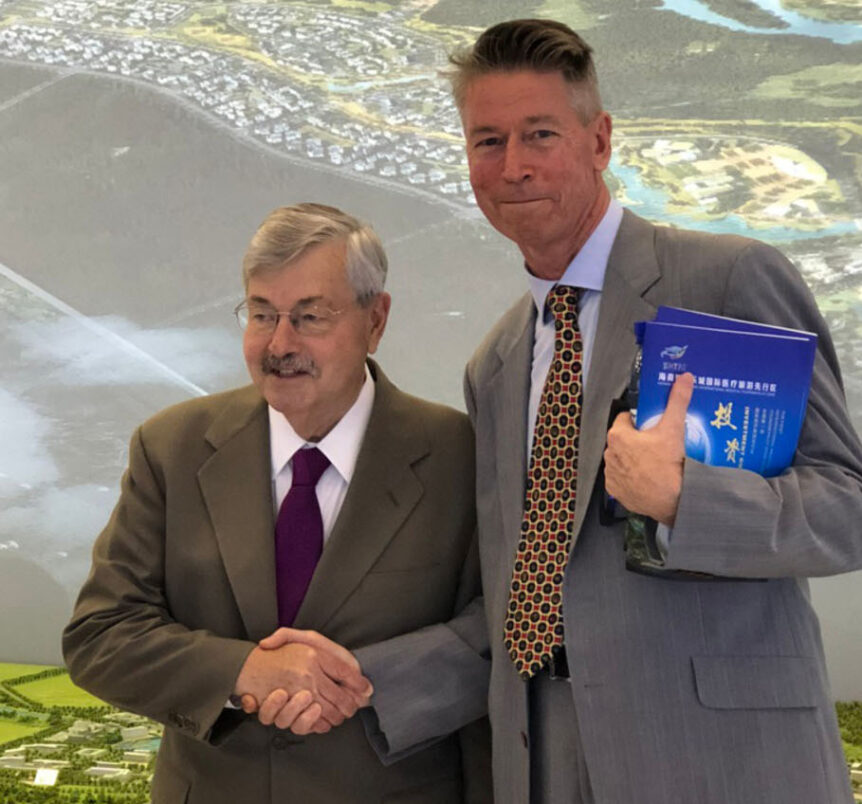 ESC Brands Asian Director for Operations Mr. Anthony Walker met with U.S. Ambassador for China Terry Branstad at the inaugural opening of the world first Boao Evergrand super hospital in  Leeching China, to discuss ESC brands Zetrisil-based nano technologies for use in the most advanced medical care facility in the world today.

Overview and Background
Through continued relationship building with the Medical Director, Dr. Dai Hui, of the Boao Evergrande International Hospital, Anthony (ESC Brands) and Chaz were invited to be part of a high-level event orchestrated by Principal Commercial Officer Betsy Shi eh of the US Commercial Service stationed at the US Consulate General in Guangzhou. The event was organized in order to demonstrate the unique commercial features of the Chinese government-backed Lecheng International Medical Tourism Pilot Zone, and to further advance reciprocal and balanced trade practices between China and the US.

The Lecheng Pilot Zone in Boao boasts the honor of being the first area in China where pharmaceutical and medical devices already approved by the US FDA can be imported directly into the 32 major medical facility pilot zone and be used with minimal or no further Chinese FDA counterpart approvals. lt should also be noted Beijing is backing this project with such exuberance, they have recently worked with the local Hainan provincial government to make the entire province of Hainan visa-exempt for visitors from almost every country in the world for up to 30-days. This policy goes into effect May ist, 2018 and the importance of this program cannot be overemphasized as it relates to the future development of this monumental initiative.

As mentioned above, when the Lecheng Pilot Zone is fully operational, it will have 32 medical facilities operating within its boundaries. Currently, several facilities, including Boao Evergrande International Hospital, have already held grand openings and are in the process of ramping up
operations.

The Lecheng Medical Tourism Pilot Zone was approved by the State Council in 2013 to create a world-leading green city project integrating medical treatment and care, ecological energy conservation, and environmental protection best practices. The goal is to make Boao an international medical tourism destination and to create an international benchmark for first class medical tourism. Phase I of the project has already received a government commitment to invest 1.37 billion RMB (217 million USD) which has been used to build ail the underlying infrastructure needed to attract additional investment from world class facilities such as Evergrande Hospital. As mentioned above, 35 projects have been approved for the zone already, 32 of which are medical facilities, and 20 of which have already either finished or begun construction.

The project is spread out over 20.14 km2 and boasts a total construction area of 9.96 km2• lt is the State Council’s intention to develop a local permanent population of 56,000 people employing 41,000 people and capable of receiving approximately 5 million medical tourism visitors per year. The annual expected core industry output value is more than 100 billion RMB (15.89 billion USD) with a tax revenue of around 10 billion RMB (158 million USD). lt should be noted this project is a part of the Chinese government’s unheard of $900 billion USD “One Belt, One Road” initiative.

Boao Evergrande International Hospital is the latest major medical project taken on by Evergrande Health. The hospital held its grand opening ceremony in April 2018 and is currently in the process of getting the hospital up and running while slowly beginning patient intake. The hospital comprises over 110,000 m2 of space with 647 beds and 190 high-end VIP extended-stay apartment units. The hospital has partnered with world-famous, major teaching hospital of Harvard University: Brigham and Womens Hospital. This prestigious institution was recently ranked number 11 in adult specialty hospitals by US News and World Report. The idea is to make Boao Evergrande Hospital the key provider of specialty cancer treatment and women’s health in China.

Sign up to receive timely, useful information in your inbox.